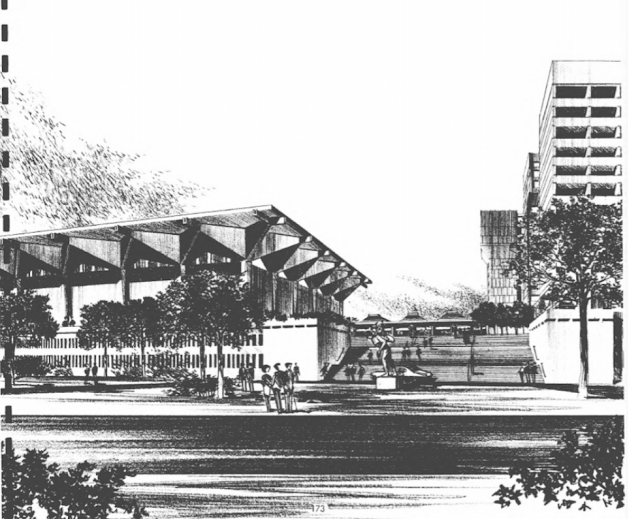 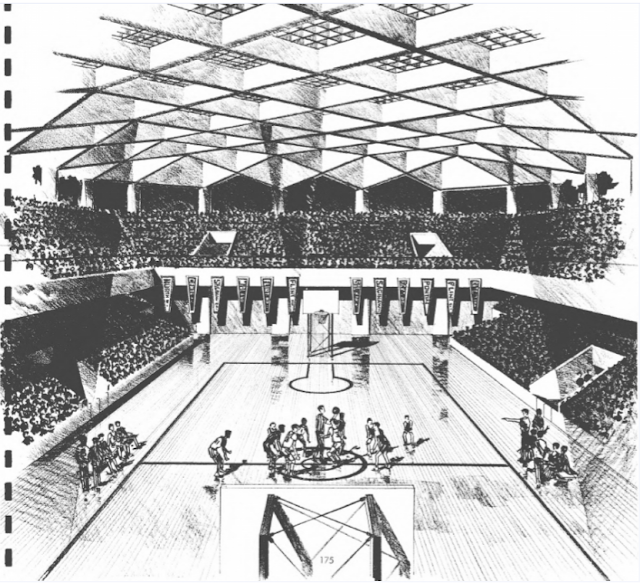 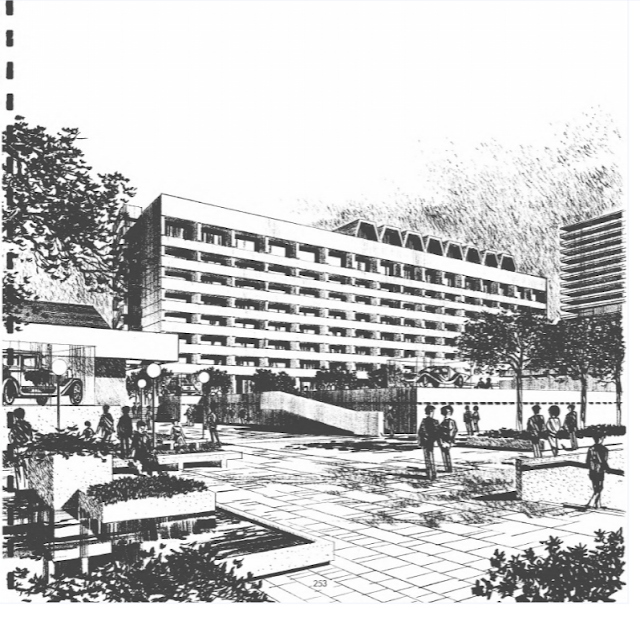 The Man Behind The Plan

C. Don Davidson, 1929-1987, was a Pontiac resident who selflessly gave many years and countless hours in pursuit of a better community for the citizens of Pontiac, Michigan and the surrounding area of Oakland County.

Davidson was a Pontiac High School star athlete and a man with big dreams and a keen sense of vision for the future. He was considered by many of his peers and associates to be a genius in his day including the college Chancellor of North Carolina State University, where he attended on a full athletic scholarship, lettering in three sports for the Wolfpack from 1951 - 1957.

After working in the south as a prominent architect for several government, city and business projects, Davidson returned home in 1965 to a city that was slowly dying and stated in his own words, *"It looks as if someone has dropped a bomb on the city". In 1965, he embarked on a teaching career at the University of Detroit as a Professor of Architecture and Urban Planning and commenced to create and develop the Pontiac Plan as a class project. In its time, there was no other project in the country that equaled this ultra-modern plan and how it would have impacted not only the city of Pontiac but the entire area of Southeast Michigan. Davidson also envisioned a people-mover rail project that would link Downtown Pontiac to the Pontiac Stadium (Silverdome) location, continuing on to Detroit and perhaps to Ann Arbor.

Professor Davidson  and his architectural class would develop an urban renewal project for the city of Pontiac under the direction of Bruno Leon, Dean of Architecture, giving his students a chance to develop their creativeness by assigning them to projects and surveys pinpointed to building cities, with Pontiac as their guideline. Some would say that Davidson became obsessed with a vision of a rebuilt downtown Pontiac that would serve as an urban model for the rest of the world, a project he created that became known as 'The Pontiac Plan', a project and dream he gave unselfishly as a gift to his beloved city with no financial reward and little recognition.

The concept of a multipurpose or a dual stadium complex was also a part of Davidson's vision of his master plan for the city of Pontiac.

Davidson, who grew up in Pontiac, termed the city "the measuring rod of my life." He chose to work in his hometown of Pontiac, both in architecture and publishing because "Pontiac is a microcosm of the rest of America and its problems. To run from those difficulties is to merely pass on a more difficult set of problems to future generations. If people aren't willing to fight the good fight, blight will spread all over the county and the value of Oakland County will be killed because people chose to ignore the problems. If we cannot solve our problems in Pontiac, they cannot be solved in other cities." -Davidson quote, The Pontiac Times, Dec. 7, 1973 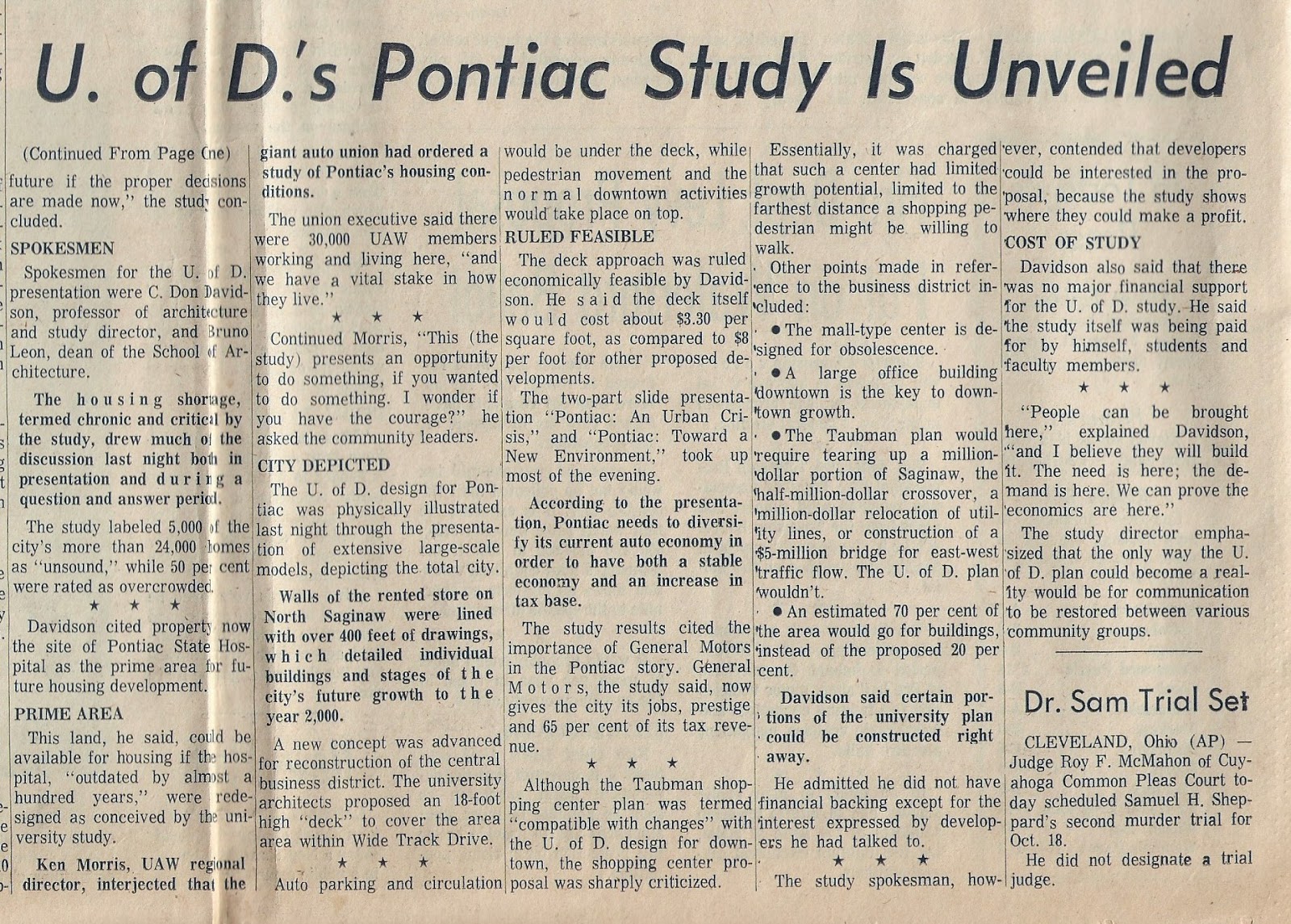 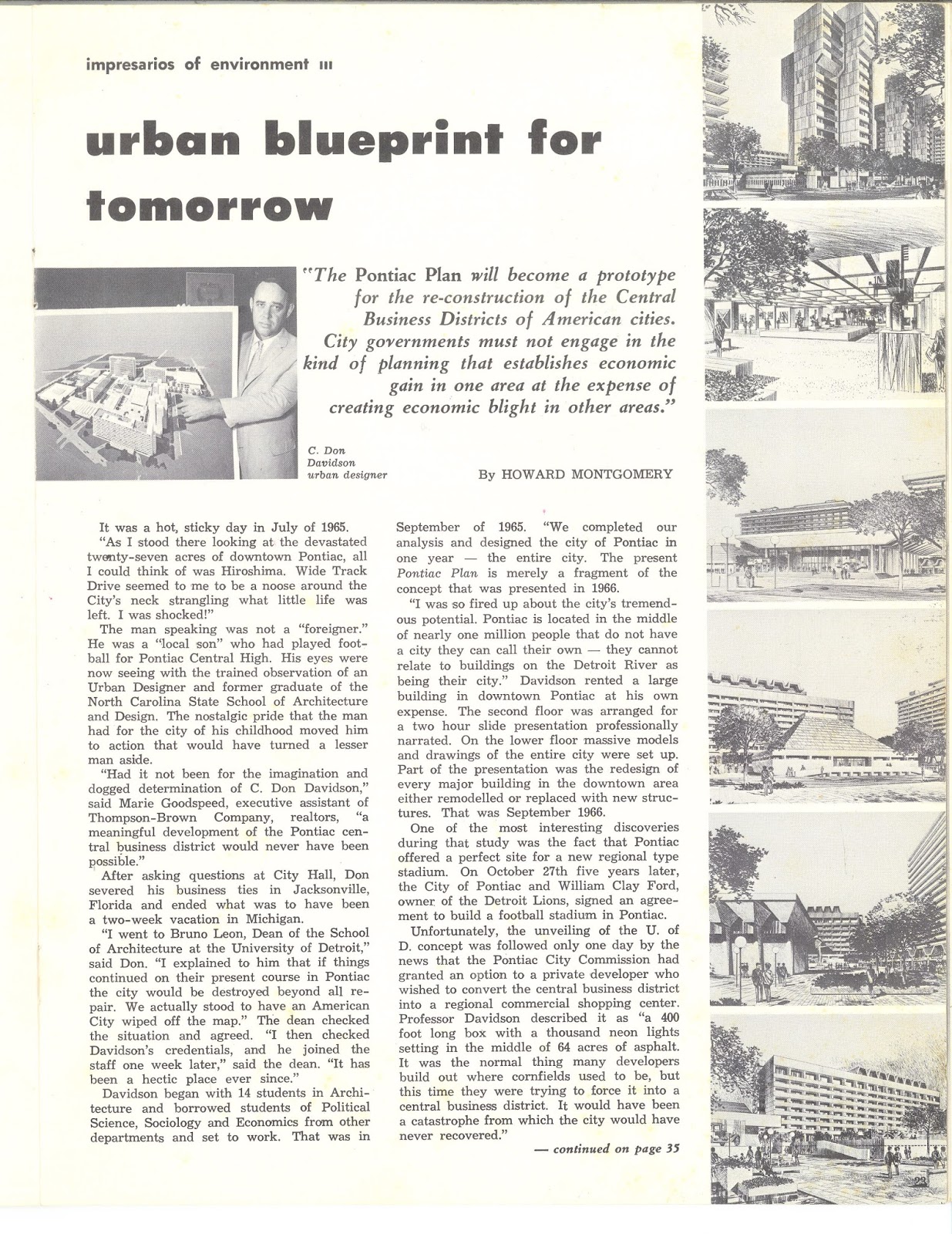 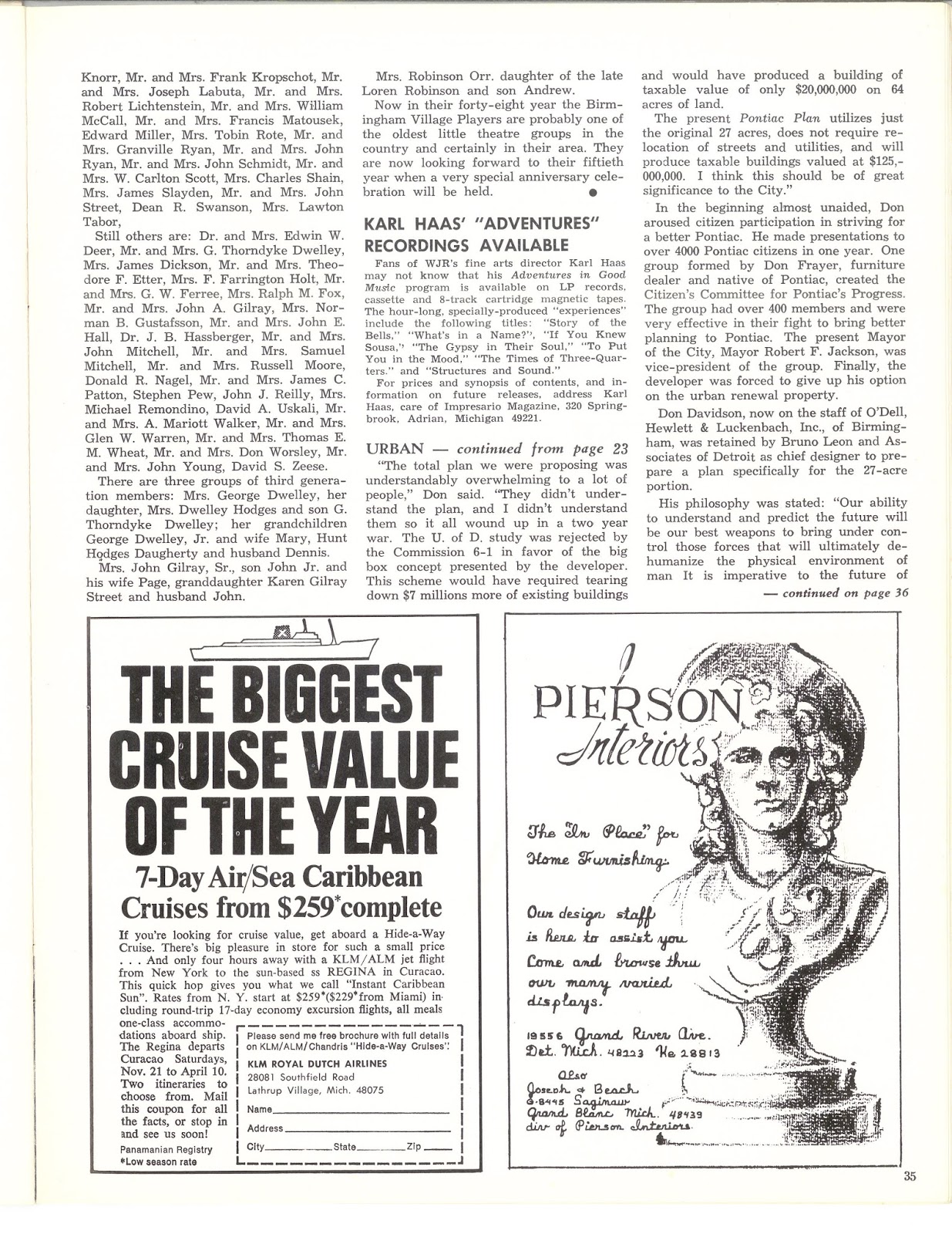 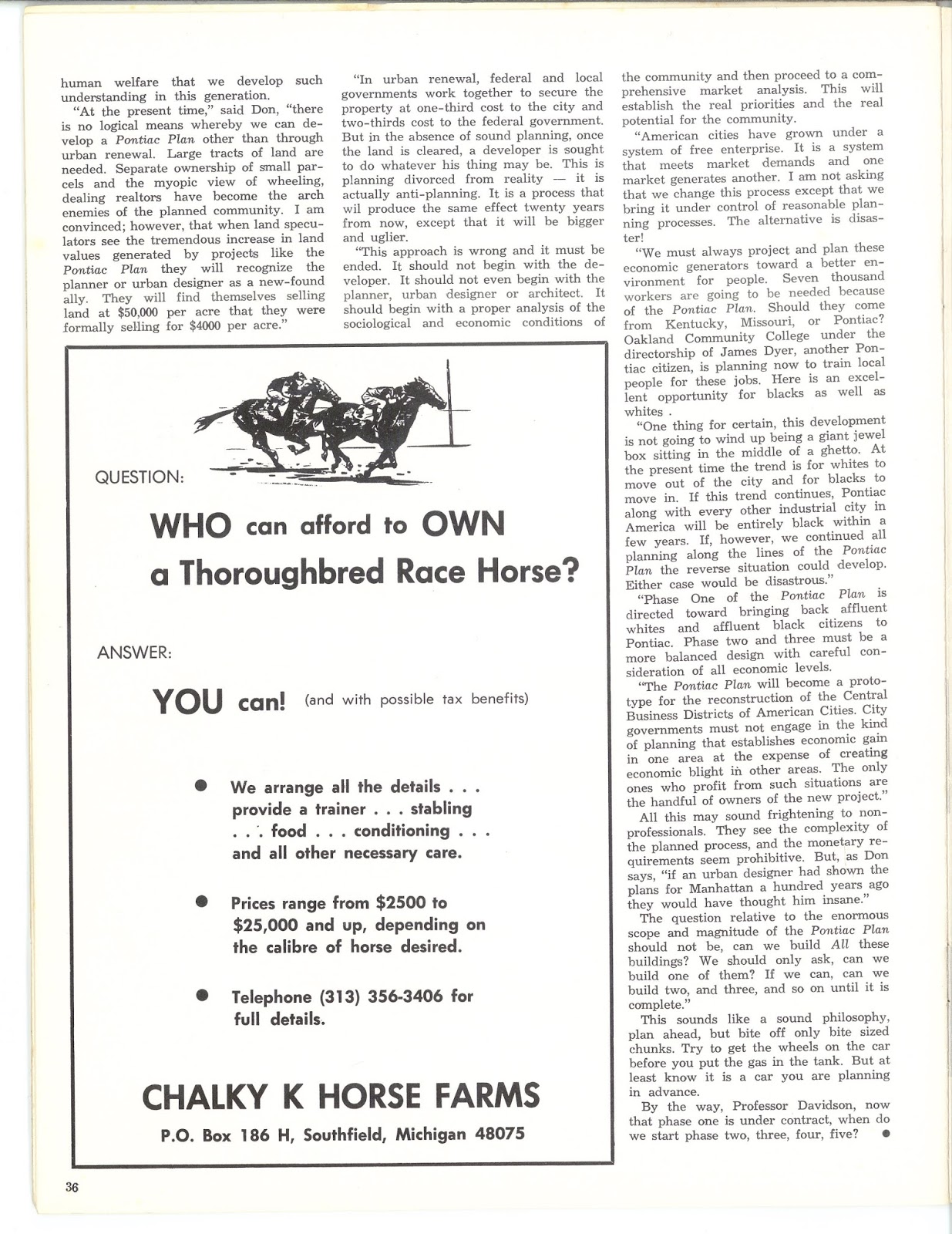 Davidson is given a 'key to the city' by Pontiac Mayor Robert Jackson
The Pontiac Press, May 21, 1971 - 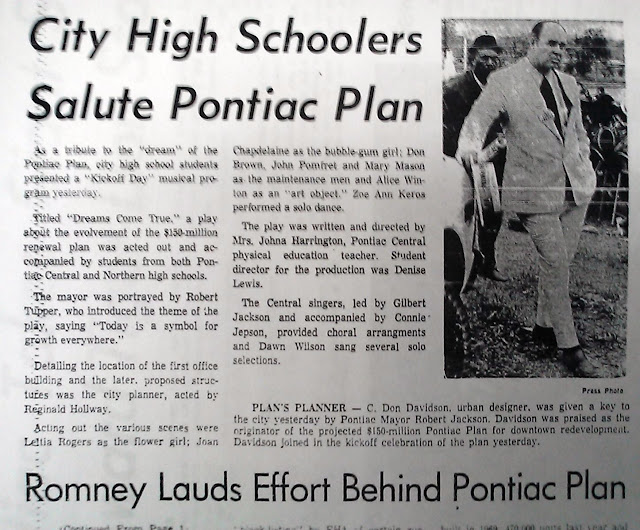 Plan's Planner - C. Don Davidson, urban designer, was given a key to the city yesterday by Pontiac Mayor Robert Jackson. Davidson was praised as the originator of the projected $150 million Pontiac Plan for downtown redevelopement.  (courtesy of the Pontiac Press) 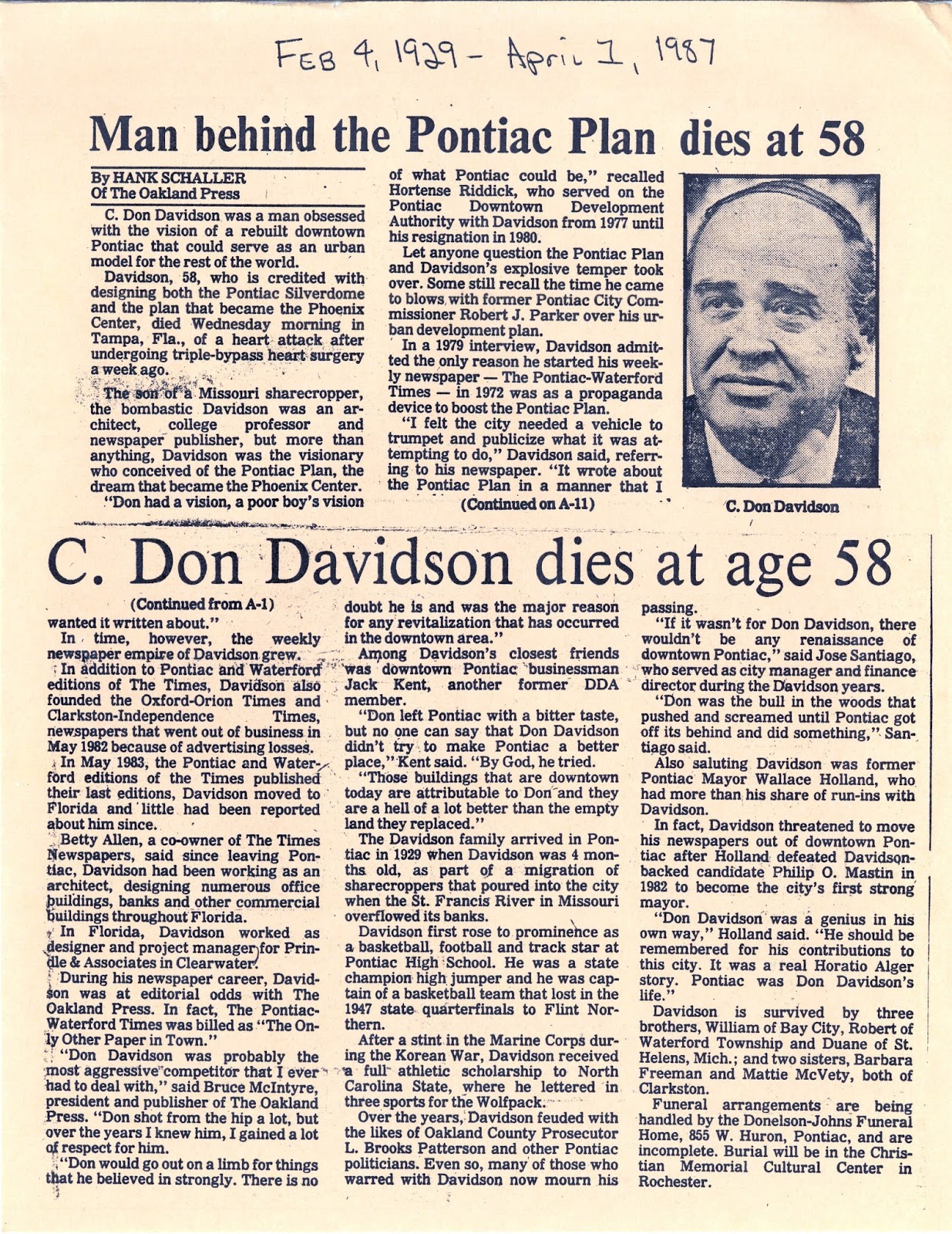 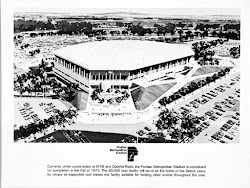